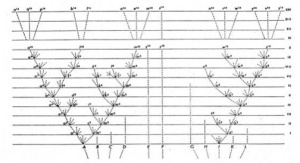 I just saw a very interesting piece by Ben Zimmer, whose post details 144 words for which Darwin has the earliest recorded use in English (and he compares to Lincoln, who has one). One of these words is “phylogeny”. I was a little surprised because surely Haeckel invented the term phylogeny. Indeed he did, but on reflection he obviously didn’t write in english. The 6th edition of the Origin of Species (1872) includes this paragraph

“Professor Haeckel in his “Generelle Morphologie” and in another works, has recently brought his great knowledge and abilities to bear on what he calls phylogeny, or the lines of descent of all organic beings. In drawing up the several series he trusts chiefly to embryological characters, but receives aid from homologous and rudimentary organs, as well as from the successive periods at which the various forms of life are believed to have first appeared in our geological formations. He has thus boldly made a great beginning, and shows us how classification will in the future be treated.”

It seems that Haeckel first used the phrase in 1866 in “Generelle Morphologie der Organismen” as cited by Darwin above. Is the 6th edition the first one to include this quote? I’m not sure.

I think that 144 novel words indicates that, yes Darwin was inventive, but more than that he was also very well read, and did not confine himself to english sources.