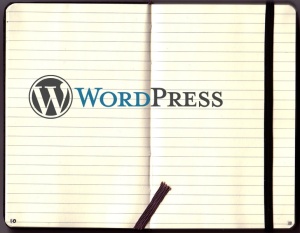 In my previous post I said that I had been testing software and decided that the new version of WordPress would be my electronic laboratory notebook (ELN). This post details some of the reasons.

WordPress is open software under a GPL license, allowing it to be distributed and modified. I really like this. There is a very large and active community of people supporting it. This means that even if WordPress HQ was hit by a meteorite tomorrow the software would be unlikely to die. Like Evernote (that I mentioned previously) WordPress exports as xml, but in a standard format that can be easily imported into Blogger or other software. It can also be made to export posts as PDF and MSWord via plugins. I can’t think of anything more important than having my data in easily interchangeable formats, I have changed my mind about ELNs before and I don’t want to be locked in.

Syncing: Since blogs are ‘on the web’ they are accessible from anywhere and cannot be out of sync.
Style: WordPress2.7 is very slick and attractive software indeed. More importantly since content and style are separate entities you can swap between >600 free themes. Yes, I know it still sounds superficial to be so worried about how it looks, but you will have to live with your ELN for years! I need flexibility to control appearance and layout. Beyond appearance WordPress2.7 has a lot of flexibility to control different aspects of your environment.

Other aspects of WordPress
Plugins: There are over 4000 community developed plugins to extend functionality. If its not there you could write it yourself. These include several functions I’ve become interested in using:- exporting posts as PDFs for archiving the last few months activity, automatically colouring code snippets, posting from pre-prepared templates.
Comments: I’m thinking primarily about my own use at the moment, but would like to use this with students and postdocs too. Sharing and commenting is very valuable.
Versioning: WordPress2.7 has a good, wiki-like versioning system. This is useful if you update an experiment and need to see exactly what changes you, or a lab-member, has made.

Here are a couple of screenshots. 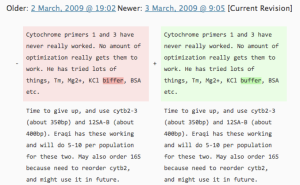 Privacy: This system allows you to implement your own level of privacy, from completely open, to selected users, to complete privacy according to your preference. I have thought about this issue quite a bit and implemented a private ELN for myself. If you come to different conclusions it is possible to allow selected users to subscribe, edit, author or administer as required.
Tags and Categories: The combination of categories (“selection”), subcategories (“hemagglutinin”) and tags (“dN/dS”) works better for me than just tags or just hierarchical folders.
“Press This”: the (strangely named) javascript button can be dragged into your browser and can be used to add selected text or the page as a blog post whenever you come across something. It isn’t as good as Evernote’s capture tool, but it captures text fine.
On the move: There is a WordPress application for iPhone/iTouch and other mobile devices. Posts can be emailed in too.

Something I’m not sure about yet is associating (non image) data. If I have an excel spreadsheet that is part of an experiment I believe I can upload it and then link to it from within the blog text. If I’m right that would be useful as it would permanently keep data and description together. The data files would then just be in an ftp-accessible folder on the server which I suppose could be backed up with a script. I’ll have to investigate more and see if this really is the case.

I tried WordPress out with a free blog hosted at wordpress.org. I used this for a while, but wasn’t entirely happy with the flexibility. The themes I wanted weren’t among those available and it isn’t possible to install plugins there. So although it was quite functional I decided to rent my own domain hosted at DreamHost. That is what I’m working with now, and in a post soon I’ll sum up my experiences both good and bad. Overall I’m quite happy with it though.