I’ve been exploring Wolfram alpha the new “computational knowledge engine”. If you want to see what it can do have a look at the introductory screencast. It looks really interesting. Taxonomy and information about species is not what it does, its designed I guess to summarize and display primarily numerical data “GDP France / UK” will provide an answer (0.9197) and a chart of relative GDP of the two countries through time.

I tried it with a few species names. It couldn’t understand Meloidogyne incognita or Brachionus plicatilis and showed no signs that it recognized them as species names. Pan troglodytes, Turdus turdus, and Tyto alba however were recognized immediately and information displayed. I’ve displayed what you get below. 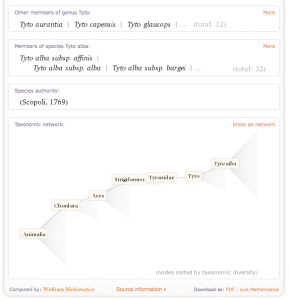 I quite like it in some ways. I like that they attempt to display species authority. I also like that it cites sources for the data.

I think its a bit prettier than Rod Page’s iSpecies.org, but I’m not sure the information is really as useful. Wolfram alpha results in general don’t seem to like linking out to other sites, maybe its an early marketing thing.

I then tried a few comparisons to see what it could calculate. I completely failed in all attemts to find a syntax that would produce the relative sizes of mice and elephants. “Compare mouse elephant” produced the taxonomy of the two and a branching network to show where they diverged, but it was really poor quality telling me that rodentia gave rise to mice without mentioning any other divisions (Sciurognathi; Muroidea; Muridae; Murinae) whereas elephants at least had Proboscidae and Elephantidae mentioned in their path.

After a bit of investigation it seems that when I type “size elephant kg” it returns an answer of 44,000 kg. Wow, big elephant. Wikipedia tells me

Hmmm, some investigation reveals Wolfram may be talking about the Elephant yoga publishing not the animal. I’m a little confused now what is being referred to, cumulative weight of their magazines I think.

I still think Wolfram looks interesting, and powerful on some topics, but taxonomy and species info isn’t where its strengths lie at the moment. Instead I cheered myself up by discovering that I may not die quite yet “life expectancy male UK”.